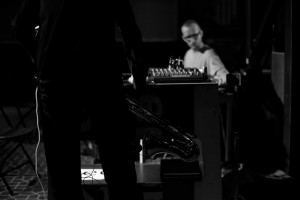 Bass-clarinet and electronics player Henk Bakker (a.k.a. Subterraneanact) is a mainstay in the Rotterdam improv scene, and co-runs the famous Worm studio. Knob twiddler Rutger Zuydervelt (a.k.a. Machinefabriek) is mainly known for being ridiculously prolific. For a gig at Worm, organizer Lukas Simonis came up with the idea to pair Henk and Rutger for a live performance, their first as a duo. They happily accepted the challenge, but not without planning a improv session to rehearse. With Henk on bass clarinet and live manipulation, and Rutger using his analogue tone generator, contact mics, tapes and effects, the two hit it off like a pressure-cooker. Without wasting time to discuss any plans, they simply communicated through their unrestrained, boisterous sounds. In the two hours they spend together, 90 minute of music was recorded. After some editing, the album ‘Persistent Objects’ took shape, and is now released on CD by Opa Loka Records.